Muza Kawasaki Symphony Hall opend on 1 July 2004 to symbolize the City of Kawasaki's concept as “The City of Music". The name “Muza" is coined from two words, “MUsic" and the Japanese word “ZA", meaning a place of gathering, with hopes for the hall to attract and serve a wide and dicerse audience.
Muza was severely affected by the great East Japan Earthquake in March 2011 and closed its doors for two years to reconstruct its destroyed ceiling and acoustic materials.
The reinforced hall which reopens in April 2013 ensures the highest levels of safety and security, while continuing to produce outstanding music performances to serve its global audience. 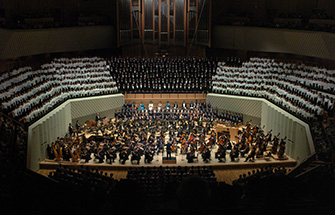 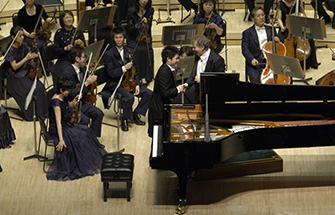 Enter the Extraordinary Soundworld of the Spiral Auditorium

The hall consists of 1997 seats which surround the stage in a spiral form, typically known as the vineyard arrangement. This structure enriches the quality of music while creating a sense of togetherness between the stage and the audience. With a focus on classical music, the hall presents a diverse a range od acoustic performances, and has received high acclaim from many top artists of the world. It continues to evolve, just like a musical instrument, in its quest to achieve the premier resonances of sound. 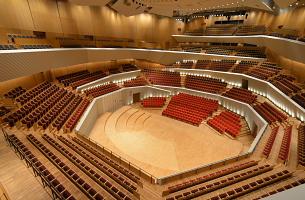 Muza enables enjoying affluent and harmonious sound generated by space that transforms according to types of music almost like it were alive, as well as its beautiful spiral pattern and state-of-the-art acoustics. 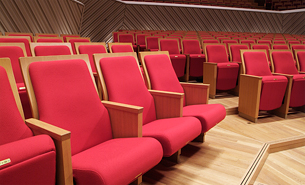 The cloth which is on a back of the seat, reduce the difference of the acoustic between rehearsal and actual performance.

The seats after the 2nd row of block 4C have footrest. 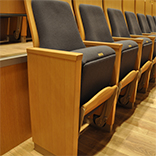 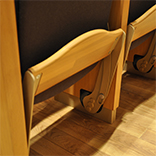 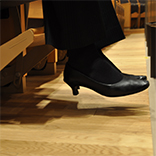 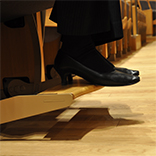 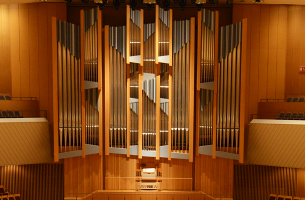 The grandeur and modern designed pipe organ consists of 5,248 pipes and is indeed the pride of the hall. Built by the renowned organ builder Orgelbau Kuhn AG in Switzerland, the timbre is as colorful as that of an orchestras, filling the hall with a rich and majestic resonance.
The pipe organ boasts a substantial repertoire from baroque to contemporary music. Out of its 71 stops (timbre), it is capable of producing sounds of Japanese authentic instruments such as the sho and shakuhachi.

Process of installing the pipe organ 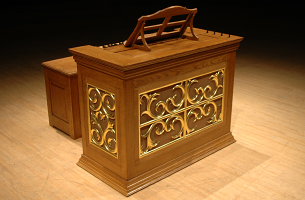 Removable compact pipe organ consists of 4 stops (timber). Built by Marc Garnier Orgu in France, the positive organ is used at the Assembly room and other places. 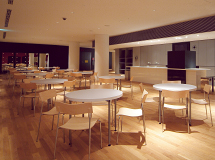 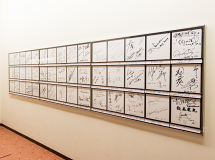 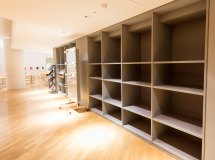 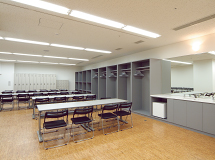 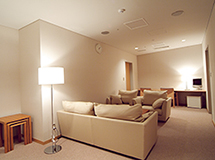 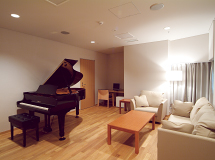 There is a sofa and café table in a spacious orchestra foyer, therefore the performing artists can relax and pause before or after performance. Meticulous considerations have also been extended to the dressing room. Seven of the 12 backstage dressing rooms are private rooms and few of the private room are equipped with pianos, shower room.